Veterans Centre Beyond The Battlefield

Doors set to open next month to ‘one of its kind’ veterans’ centre
We give credit to Newtownards Chronicle for the following editorial:
Newtownards is set to see Northern Ireland’s only centre dedicated to helping veterans open its doors next month, and the charity behind it is calling on everyone to ‘take ownership’ of it.
It has been four years in planning, but the Beyond the Battlefield charity, which helps veterans through psychological, health, financial and legal issues, will open the doors to its new facility on Regent Street in the former Town & Country Hotel building
at the start of October.
Since January 2012, the charity has counselled over 200 veterans, discharging 162 of them as fit for work, and has helped to rehouse 48 homeless veterans, along with 46 successful tribunals with an increase of at least 20% in their pensions. In addition, it has secured over £2 million a year in pensions and almost £5 million in back pay and compensations.
It has also worked alongside 57 military families in dealing with issues such as stress, alcohol abuse, drugs, domestic abuse, suicidal tendencies, bereavement issues and financial difficulties, and tackles these issues while working alongside other professional bodies. It deals with, on average, 25 veterans each week.
Up until now the charity has operated out of a building on the Jubilee Road, but their next move will not only be the biggest for them but also the biggest for Northern Ireland, making it the only centre of its kind dedicated to helping veterans. However, its chairman, Robert McCartney, is calling on all sectors of the community, particularly political parties, to get behind it
“We really do need the politicians on board, and we need them to be more vocal, first of all with the MoD to be able to produce this,” he said. “Once we can speak with one voice then we can lobby with one voice and we’ll be able to get the rights that everyone else in the United Kingdom are entitled to. They need to be recognised,” he said. “That’s the main thing. Our veterans need to be recognised.
“We have already done a lot of work with the National Health Service and the Mental Health services, so as far as the sustainability of it is concerned, the sustainability is no problem whatsoever, because it will pay for itself. It’ll pay for itself through the therapeutic practices that we do, but the normal capital costs that we require now to get that up to the standard to be able to do all that is what we need at the moment. So, we need support not just from the politicians. Really I want every veteran in Northern Ireland, and beyond, to feel that that’s their centre, and everyone’s got a piece of it. It belongs to an individual veteran. So, any needs that he has, he can actually, quite rightly, walk in through those doors and ask for those needs to be met. We’ll do everything that we can in our power. We’ve already had a lot of experience over the years with compensation, with pensions and everything else. We need to keep this going because of the homeless situation.” Robert said they have had to turn away seven homeless veterans over the past few weeks, but even then they were able to sort some accommodation for them.” There will be 56 staff working out of the building, which will include counsellors across the Peninsula.
Robert also said he believes it will not only be beneficial for veterans but the wider community, and predicts it will become a hub of activity. “We’ll also be using this through the week to bring different community groups through,” he said, “so they can get a better interest in how the military and civilians really do relate to each other. We’re trying to get this taboo that all soldiers are killers out of the way. “There will also be advantages to the town as far as traders are concerned. We will be bringing veterans groups through here on a weekly basis.”
In addition to the Regent Street building, they also have a 92 acre site just outside Killyleagh that was once a farm but has been converted for therapeutic sessions.
Robert added that they could not have found a better building suited to their needs. There will be counselling rooms at the back, accommodation at the top, which can cater for families, conference and training facilities on the first floor and more facilities on the ground floor. “It meets every need that a veteran requires,” Robert said.
Its chief executive, Annemarie Hastings, said it has been hard getting to this point. “It’s been a very long, slow process; it’s been hard work,” she said. “We’ve had to diversify many times when we were doing business plans to bring us to the point where we are now, which has been very difficult; burning the midnight oil, working weekends and constantly crying out for support.”
She said they have appreciated the constant support of Strangford MP Jim Shannon. “He’s been amazing with us; he’s always been with us from the start,” she said. “He always will be there; I’m very sure of that.” She reiterated Robert’s call that the centre will be for every veteran across Northern Ireland, regardless of where they are. “It’s for them to use and take ownership of,” she said. “It’s imperative for every veteran throughout the province, she added. “They don’t have the services that we offer and there is not another centre like this in Northern Ireland, or indeed in Ireland. It will be a centre of excellence.” 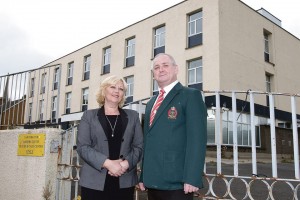 September 28, 2015By Beyond The battlefieldUncategorized