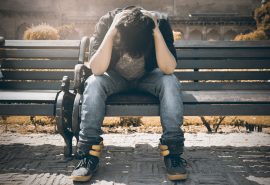 This article was published in the Newsletter on Tuesday 2nd July 2019:

Charities have credited a JPIMedia campaign for prompting Government action on the number of military veterans taking their own lives.

The Ministry of Defence (MoD) has detailed a substantial action plan to better understand suicides among ex-service personnel in the wake of an investigation run by the News Letter and other JPIMedia titles across the UK.

Defence Secretary Penny Mordaunt has confirmed the importance of the plans to veterans and their mental health. Photo: Nicholson/PA Wire

The Government had been accused of turning a blind eye to the issue, with the campaign revealing that the UK did not monitor the number of veterans taking their lives, unlike allies such as the USA, Canada and Australia.

Robert McCartney, of Northern Ireland-based charity Beyond the Battlefield, said the Veterans in Crisis campaign, run by the News Letter and JPI Media, could take “huge credit” for the developments.

“Nothing was happening on this issue before the News Letter and JPIMedia series shone a spotlight on them,” he said.

“It was clear that the publicity put panic into everyone. Before that I had met with three or four senior MoD ministers and there was no movement. But afterward, the ideas that had been discarded due to expense were taken out and progressed.”

Nothing was happening on this issue before the News Letter and JPIMedia series shone a spotlight on them… It was clear that the publicity put panic into everyone.

Robert McCartney Beyond the Battlefield

A study announced in October into deaths among veterans who served between 2001 and 2014 is now to be expanded to include more recent service leavers, according to the MoD.

It will be updated on an ongoing basis to provide near-real time monitoring of suicides.

A further study into ex-service personnel who take their own lives will look at risk factors in the year leading up to a suicide.

In addition, the 2021 census will collect data on service history for the first time to build a clear picture of the UK’s veteran population.

He said: “The study will help to determine the incidence of suicide and shed light on what has been going on in this sensitive area.

“Additionally the promise that suicides in the military and veteran population will be monitored going forward is a massive step forward.”

In the original JPI series, Dr Busuttil had observed that suicide rates had significantly climbed among veterans from the UK’s allies over the past decade. He had challenged the UK to explain why it believed it would be the exception, and pressed it to collect credible data to explore the issue.

Defence Secretary Penny Mordaunt told JPIMedia that the data collected will be critical in supporting veterans.

“Every suicide is a tragedy and the loss of a veteran is always felt throughout the entire armed forces community, as well as with the families and friends who are left behind,” she said.

“It’s vital we work across Government to better understand the number of ex-service personnel who take their lives, as well as the causes.”

But Shadow Defence Secretary Nia Griffith called for coroners to do more to record instances of veteran suicides.

She said: “We know that there is a lack of comprehensive data on these cases. That is why we support calls from veterans’ charities to ensure that coroners record that important data, just as our US and Canadian allies do.

‘The Government must act urgently to legislate for this now so that we can better support those who have given so much in the service of our country.”

Other actions unveiled by the MoD to support at-risk veterans include:

Plans to ask service personnel transitioning into civilian life for permission to contact them in future and signpost them towards support, if required;

Last summer JPI ran a UK-wide series which found that there is no system to track suicides among the UK’s 2.6 million veterans, despite evidence that thousands struggle with serious PTSD, depression and suicidal thoughts.

By contrast, we found that the US, Australia and Canada all carefully monitor veteran suicides and address the rises that they have found.

Lagan Valley MP Sir Jeffrey Donaldson, a former member of the Westminster Defence Committee and president of the UDR Association, previously told JPI that he was “very concerned” by the “appalling” suicide rates he was seeing, which, although small, were “increasing in incidence”.

The detail of the new MoD plans were confirmed to the News Letter in a letter from Veterans Minister Tobias Ellwood to DUP MP Jim Shannon, who had been lobbying on the matter.

Anyone affected by these issues can contact the following organisations:

July 2, 2019By Beyond The battlefieldUncategorized