Mourners shared both laughter and tears at the funeral of Royal Irish veteran Brett Savage in Newtownards today.

Mr Savage, 32, had joined the Royal Irish Regiment at 16. He went on to survive the notorious Siege of Musa Qala in Afghanistan in 2006, where he and a handful of other soldiers survived a 55 day attack from 300 Taliban fighters. 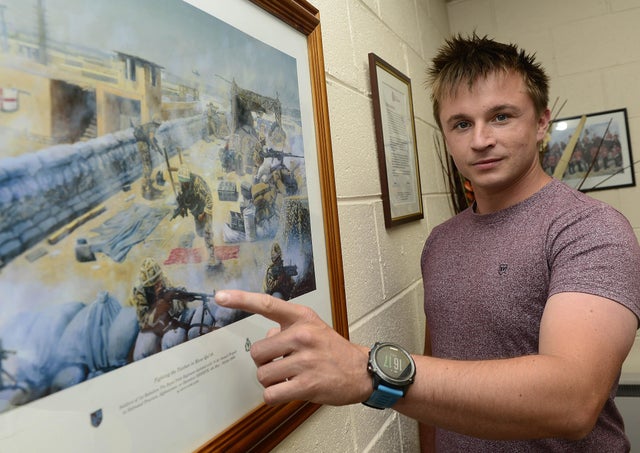 Subsequently he campaigned for better care of soldiers who, like him, suffered from PTSD as a result of their service.

Tragically though, he ended up taking his life last weekend, prompting a public outpouring of grief from his family and many friends.

His friend and counselor Robert McCartney, from mental health charity Beyond the Battlefield in Newtownards, repeatedly prompted peals of laughter today while recounting the personality and exploits of the young veteran.

But on a more serious note, the point was made repeatedly during the service – to many other veterans present outside – that help is close at hand and not to struggle alone with PTSD.

Brett’s sister Holly opened up the service with her own emotional tribute on behalf of her family,

“We never thought this day would come so soon,” she said, through tears. “We all had so much to live for – it just won’t be the same without you here.

“There is no doubt about it, we were all so lucky to have you in our lives.

“The times we had together, you have left your footprints in our hearts.

“You were such a special person. Undoubtedly you lived the best possible life, always willing to help everybody else, even when you were fighting your own battles, you still had that smile on your face.

“Everybody knew Brett by his bubbly personality. You were such a character.

“Even when you met someone for the first time you left a lasting impression.”

Then Annemarie Hastings of Beyond the Battlefield read ‘the Soldier’s Poem’, “for Brett, his comrades and every soldier out there today”. It highlighted the debt that everyone in a free society owes to the soldiers that defend their freedoms.

A soloist then sang the Irish ballad that Brett would often have sung to his mother, ‘A Mother’s Love Is A Blessing’.

Pastor Alan Stephens of Glenmachan Church of God, who took the service, went on to urge people to think carefully about Brett and his life.

“Memories of the sacrifices he made – not just as a soldier but as a son, as a grandson, as a brother, as an uncle and as a friend.

“And think of the examples he left. I had the privilege – and I mean that sincerely – of meeting Brett and talking to him. And he was a fine young man, a well mannered young man, a respectful young man.

“And you could see as you listened and talked to him of how he was that person who would go the extra mile. 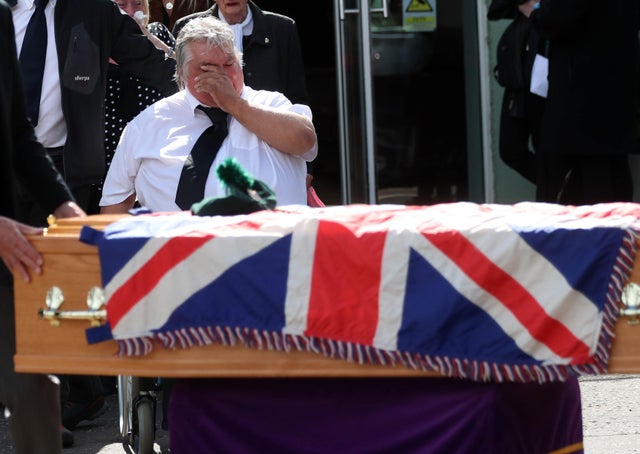 At a time of bereavement you don’t want to think about the future and how you will cope without this individual, he said.But he urged people to seek comfort and faith in God to see them through their grief.”God shall wipe away all tears from their eyes,” he read from scripture. “There shall be no more death, neither sorrow nor crying. Neither shall there be any more pain.”

The pastor urged veterans to seek help if they are struggling.

“I would exhort those of you, especially his comrades, who are maybe going through the same thing as Brett went through, this PTSD… I have counselled many young men with PTSD and they reflect to me that sometimes you feel so alone because no-one really understands what you are going through.”

But I want to tell you today that there are people who understand what you are going through.”

The Lord Jesus Christ, obviously, but Beyond The Battlefield and the great work they do with soldiers. They are there to help.”He said it was a sign of strength, not weakness, to ask for support.

But he also called on the authorities to do more for veterans struggling with PTSD.

“And so we pray people will learn from this and that someone, somewhere will take notice of what is going on, to brave young men and brave young women.” Robert McCartney of Beyond the Battlefield paid a gritty tribute which repeatedly prompted laughter.

”As you all know Brett was a very special man in many ways and he was also a lunatic in many ways,” he said.He asked the audience to not think seriously about Brett.

He had been trying to teach him the words to ‘A mother’s Love’s a blessing’ for seven years without success, he said.

But at least “he got it right once” even though it was the soloist at his funeral who had to do it for him.

Brett came to Robert seven years ago in difficulties and with PTSD.

He paid credit to the fact that Brett had now raised the profile of the issue right across the UK media.”So Brett has got his way eventually… everyone knows him.”

Mr McCartney also paid tribute to the many veterans at the funeral who gave Brett practical support.

”One got him a car, another got him a washing machine, and they all clubbed together to help him.”

He noted how especially in the Royal Irish veterans may not know each other’s real names, but only know each other by nicknames.”But that is how close they are – they are just a family”.Brett had been in good form before he died last weekend, he said, having just spent the day in the Mournes. 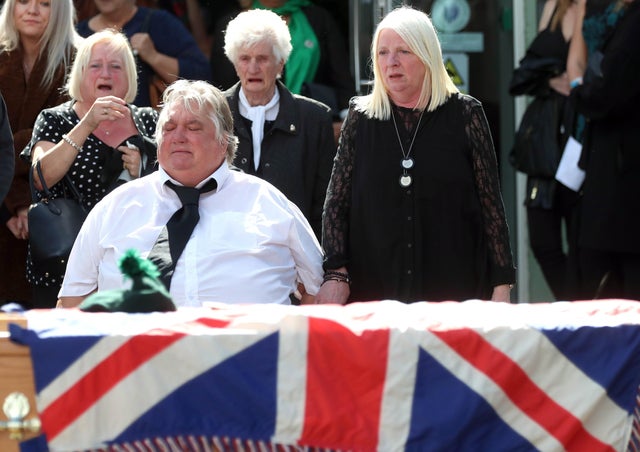 Mr McCartney had been talking to him about what had gone wrong with his time in the army in the short term but how things were now going to go right.

“He had both up and down days… but on his up days he was always a lunatic,” he said to a peal of laughter.”No matter who you were in the office with no matter who you were counselling – it could have been Jim Shannon MP sitting there – Brett would have just come in and slammed the door…. he broke the glass about 20 times, but never paid for it….. he just came in with that big smile.”

He added: “Brett is the only man in the world you can be smiling and talking to and he had his hand on your wallet – and you were actually thanking him for doing it… but what an amazing man.

He then led mourners in a round of applause for the young veteran, before putting words to the reality of soldiers’ courage.

”Courage is someone who carries fear and still has to do what needs done. That is what all these men in this room have done.”

They all did what needed to be done on the battlefield for Queen and country, he added, as did Brett.

He noted that when Brett came back from the army – and wrestled with PTSD – he would often see him on a Monday morning with either a black eye or a busted nose.

“And I used to say to him, Brett… you can’t fight but you can take a quare beating,” again prompting laughter.

Mr McCartney closed by reading an excerpt from a book by an SAS soldier Billy Billingham, which spoke of the need for soldiers to have time and support to “decompress” when coming out of combat where colleagues had been injured or killed.

”The truth is that I loved the fear and the adrenaline mixed together, I was addicted to the excitement,” he read from the book. “… but eventually those bits of doubt and sadness and anger eat away at you … and then it is no surprise that you end up snapping and taking it out on your family, and volunteering to go back”.

Mr McCartney said that that narrative applied to all the veterans present, and was one he was only too familiar with himself, having come through PTSD and then set up the charity to help others. 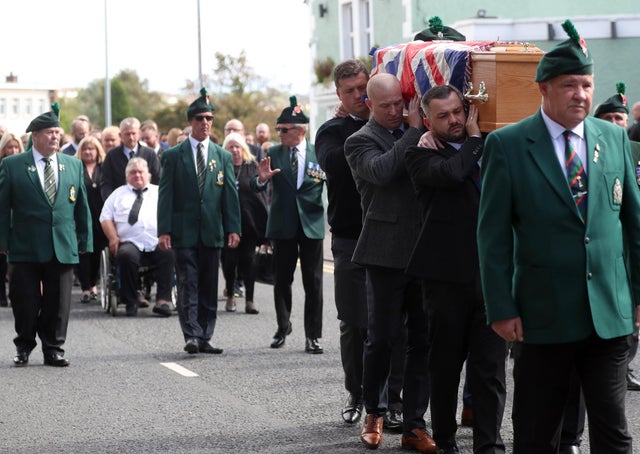 And at that point he paid tribute to Pastor Stephens who arranged counselling for him which resulted in him helping thousands of others come through PTSD.

In closing, the Last Post was played, while Mr McCartney saluted Brett’s coffin, which was draped with a Union Flag and had a framed photo of the young veteran standing on it.

Numerous people touched the coffin during and after the service in respect, before it was carried out.

If you have been affected by these issues you can find help here;-

September 8, 2020By Beyond The battlefieldNews