Veteran: suicide seemed only way out – now I help others 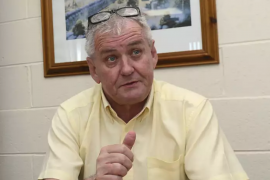 A Belfast veteran who lost his family and business due to Post Traumatic Stress Disorder considered suicide as a way out – but now helps others recover from the same plight. Robert McCartney, 59, joined the Royal Irish Rangers 1975 as a 16 year old and did several tours of Northern Ireland and other parts of the world. He left his army family and entered the civilian world in 1995.

The original article was published by The Newsletter at: https://www.newsletter.co.uk/news/veteran-suicide-seemed-only-way-out-now-i-help-others-1-8571150

He had many of the typical symptoms. “I had hypervigilance, where I felt danger everywhere I went. I couldn’t go into shopping centres or go into crowds. I couldn’t drive for more than ten miles without taking a panic attack. “I had no quality of life whatsoever. I had lots of flashbacks, jumping out of the bed in the middle of the night looking for my rifle jumping up squealing all over the place.”

He also had low mood swings. “You perceive yourself to be in danger all the time. And if you are in danger all the time then you don’t want your family around you, because you think ‘if this comes true and I am in danger and this danger becomes a reality, I don’t want them near me because they will suffer as well’. Then as a result of that the family splits. “So by the time you admit you have PTSD you have left a tsunami behind you where you have wrecked your whole family.”

He lost his own family in 2007 and his successful double glazing factories and showrooms. “But that was only material things, that meant nothing. My kids still aren’t speaking to me.” “Once that happened to me and I was through it and I realised what was wrong with me, I was able to understand what was wrong with me.” He and a group of other veteran friends were “self-medicating” together on alcohol. “You become a group and you are not comfortable with anyone outside that circle of friends who served with you.”

Others use different types of medication. “It can be prescription drugs which is a massive massive problem here in Northern Ireland veterans.” In his experience GPs must refer veterans to mental health services, but because they are “backed up” there is a waiting list if at least 14 months. “So the first thing the GP has to do is give them the drugs to keep them away from him, so by the time they get to a mental health professional they now have a comorbidity issue [two disorders instead of one].”

The professional they see then diagnoses them and sends them back to the GP who “can do nothing with them”. TRAUMATIC EVENTS One of his traumatic experiences was arriving just after the Falklands War to dig holes for bodies, which by the time he arrived had been frozen. “But when we put them from the body bag into the coffin they had thawed out and guts were bursting open, legs were falling off and heads were rolling away.”

His experiences at home also had an impact. “In Northern ireland you are lying in an ambush in Fermanagh south Tyrone fighting the IRA and they are coming at you all the time. You are constantly hypervigilant. Well that doesn’t leave you.” He was driving down to Enniskillen recently and saw the signs for places he served. “I still had hypervigilance 30 years later.”

“There are a million things you go through in extremes in the army. “You see a lot of your friends being very seriously injured – and not just on the battlefield in exercises.” A major training exercise in Germany involving 100,000 people allows for 26 deaths before they thinking about calling it off, he says.

He has clients with PTSD who never been on a battlefield but have seen their friends killed gruesomely in accidents. “You are taught to soldier on. But it is when you leave the army that all those things. The thing about PTSD is that if you can’t put it into the cognitive side of the your brain and process it properly, then it actually goes straight into the memory and that is where the flashbacks come from.

My job is to bring it out and process it.” He had suicidal thoughts on more than one occasion. “Basically it comes to the point where when you are looking at it [suicide] and especially from my perspective, within two years of leaving the army I could have called myself a millionaire. And all of a sudden this great life – I seemed to be trying to do everything to excess – and then all of a sudden you stand back and say I have done all this I can’t do anymore. “And there is just a feeling of total emptiness. Every feeling in your body is gone, feelings for your family, love, hate – it is all gone. “And you are saying to yourself – I am not human anymore. What am I even doing here? That is how you perceive yourself.

“There is nowhere to go except – do the best thing – leave the people, that tsunami of badness that you have left behind you – give them a bit of relief. Just go. “I didn’t actually make plans myself but I planned what way I was going to do it.” At his worst stage the thoughts came two or three times a day, for “a long period”. “That is when you seek help or you are gone.” He adds: “I felt I had done all the badness.

I had tried to make up for it and I couldn’t make up for it. So why put anybody through any more hassle? “Because I felt if I survived that then I would only do it again. It was coming back and I was coming back and I was going to destroy people’s lives again. “I had rows with everyone. You just don’t care about anyone, you don’t care about what you say, you don’t care who you hurt, or how you hurt them.”

His turning point came when he it “nearly happened”. “I was actually very very close to it happening and I said to myself – wow – and when I went to the doctors I walked in and I remember everything just flew out of me and I burst out crying. “Me just being able to sit with a stranger for five minutes and blurt it all out – the doctor was brilliant. He kept me for nearly an hour.”

Robert had no idea his experiences in the military were the cause of his problems. All he could do was explain how he was feeling. “When the doctor first diagnosed me, and this is scary, you are the last one – and I see this in 5-6 people a day now – you are the last person in the world who will admit that you are ill. “Because in the military it is seen as a big weakness and no matter how you are feeling, you always hide it. “When the doctor actually said to me that I was suffering from chronic PTSD, I got that angry with him that he was suggesting that I was weak that I walked out into the packed surgery and I said ‘are any of you going in to see him’? “And they all looked at me as though I had two heads, because they were all going in to see him. “‘I said I wouldn’t let that b****** look after my dog. He doesn’t know what he is talking about’. I was still in total denial. That was scary.”

He did not feel the civilian health care system at the time really understood military PTSD so he began to study his condition to “heal himself”. Robert was so successful that he knew he had to share his story with veterans walking a similar path.

He trained and qualified as a counsellor and now helps others with the same problems. Today he is chairman of a registered charity in Newtownards, Co Down, Beyond the Battlefield, working with over 3,000 veterans from around the British Isles who are struggling to cope with mental health issues and legal and financial struggles.

“Overall today I would describe my mental health today as ‘good’,” he adds. Rising concern about about suicide among military veterans :: Contact Beyond the Battlefield (https://beyondthebattlefield.org) tel: 028 91 228 389 or 07964574156