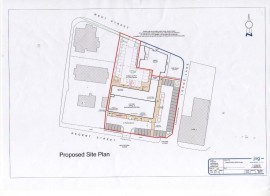 Plans are underway to open a £3.5 million centre in Newtownards specifically catering for the needs of military veterans, making it the first of its kind in Northern Ireland.

Robert McCartney, from the Beyond the Battlefield charity, told the Chronicle the statistics surrounding veterans living in Northern Ireland were staggering. In 2013 alone twice as many veterans committed suicide than all those killed during the years of the Troubles. This is just one of the areas affecting veterans that Robert believes is the reason why it is ‘crunch time’ that a purpose-built centre is made for the 42,000 ex-servicemen and women living in Northern Ireland.

The £3.5 million ‘Beyond the Battlefield Veterans’ Centre’ will be built in the former Town & Country Hotel on Regent Street, Newtownards, and will provide services covering all areas of veterans’ lives, such as mental health, respite, legal and financial advice, and, as Robert was keen to stress, it will all be free of charge. With all of this lined up, Robert said there is just one thing holding it up: “We’ve been working on it for a while. All the drawings are done, all the planning permissions have been granted, all the costings have been done. Really, all we’re waiting on now is the funding.” He said the recent Haass talks had stalled the process but Robert hopes that it will get on track and its doors will open soon to veterans from all sections of the community, irrespective of race, religion or what part of the armed forces they served in – army, navy or airforce. Robert added that the Prime Minister has promised to match any funding given towards it. It is hoped that the centre will open on Armed Forces Day on Saturday June 21 this year.

Having once suffered post-traumatic stress (PTS) following his time serving with the Royal Irish Rangers, Robert later trained as a BACP counsellor. He says that PTS is one of the biggest problems facing veterans: “Post-traumatic stress is a big issue because when you’ve got it you tend to shy away from it, and the first thing you do is deny. When you deny you have it, the only way you actually deal with it is through alcohol and drugs.” This, he said, is often the start of a downward spiral for many, which can lead to domestic problems and crime. The centre will provide legal representation if any veterans find themselves on the wrong side of the law.

Psychiatric counselling will play a large role in the centre. Because so many veterans are being referred to the mental health unit this, it has led to a backlog of up to 18 months. However, the problem, he said, is that the health system does not know how to deal with the unique needs of ex-servicepeople: “The reason why a lot of them don’t go for counselling is because the counsellors that they actually deal with are dealing with normal trauma and normal relationship issues. They don’t understand the issues that happened on the battlefield.” He said that one of the biggest misconceptions is that PTS is a result of battlefield experiences. Instead, trauma can come from many sources, such as bullying within the ranks or bad experiences while serving in a camp: “A lot of them are not traumatised by what they did but what they saw.” He recalled one example of an army ambulance driver who, while he never saw any direct action on the field, suffered from PTS after having to drive through the aftermath of a firefight and seeing the debris and bodies left behind.

As well as counselling, it will also offer secure rooms for struggling veterans, and more: “There will also be specialists there, like myself, who deal with their war pensions and any entitlements that they are entitled to. Along with that, the centre will also have different conference facilities, that the associations in Northern Ireland can actually use as a central point. Because Newtownards area and the surrounding area has got so much to offer as far as tourism, it will really give them a break by being here.”

Robert said the need for a centre is long overdue: “The prisoners have got millions in rehabilitation and are still getting it, where the guys who actually served the country , who were on the front line for all those years, got a quick payoff.”

When asked how important it was to have the centre, he replied: “It’s a crunch time in the fact that we’re losing lives. There’s more people dying yearly than was killed in the Troubles, and the suffering is absolutely scary. There are highly decorated men coming in here and they’re just a shell; their wives have left them, they’re living in the street, they’re drinking cheap wine. It’s disgusting. That’s why it’s important to stress the need for a central point. We’re not saying we’re the Salvation Army, like some sort of health centre. They’re coming in to be helped, to be rebuilt, to be given retraining for job opportunities.”

Robert said that investing in the centre at the start will pay off in the long run, by taking pressure off the health service and saving millions of pounds in medication. He also hopes that the business model of the centre will become an example that other centres across the world could follow.