Exciting times ahead for veterans’ charity 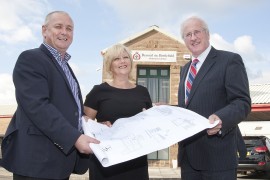 With demands for their services at an all-time high, a Newtownards charity that helps veterans says ‘exciting things’ are happening, including a special Ball for an ex-soldier.

Since appearing in the Newtownards Chronicle, Beyond the Battlefield, based on Jubilee Road, has seen an 80% increase in the number of people using their services, averaging at around 20 people each week coming through their doors. As a result, they have had to bring in more staff to deal with the workload, who have also had to undergo specialist training to deal with the unique challenges they have to deal with.

The charity was set up with the goal of helping military veterans receive the support and care after their service by helping them to receive their pensions and any other entitlements, as well as emotional and psychological support. In the previous Chronicle article Robert McCartney, one of the charity’s counsellors, noted that post- traumatic stress disorder (PTSD) was a serious problem, saying that in 2013 twice as many veterans committed suicide than all those killed during the Troubles. It also leads to other problems, such as drug and alcohol abuse.

Annemarie Hastings, the charity’s newly elected Chief Executive, told the Chronicle said they are encouraged to have seen a 50% decrease in the number of veterans who have attempted or succeeded suicide. “They know they have a place of safety and somewhere that they will receive the help they require with the different issues they have been facing before we came along,” she said. It is their ‘open door policy’, she said, that helped make people feel at ease.

Under Annemarie’s guidance they have expanded their premises and increased their counselling accommodation in order to deal with the rising number of clients. They have increased their administration area, which will give them greater flexibility when involved in different projects at once. In addition, they are continuing to work with central government and Strangford MP Jim Shannon.

She said: “We would appeal to everyone to support us and lobby through your MP, MLAs and counsellors to enable this centre of excellence to come to the town of Newtownards. If successful, Beyond the Battlefield and yourselves will be making a contribution towards the important work which we carry out, whilst at the same time bringing up to 100 jobs to Newtownards at a time when it is economically required.”

Annemarie and Robert recently presented their business plan to the First Minister. Following the meeting, Junior First Minister Jonathan Bell told the Chronicle: “I find it hugely encouraging that we have a charity based here in Newtownards that delivers for those who have served us in the Armed Forces supporting them professionally with their mental health issues. I look forward to supporting this project that has the potential to bring employment and construction to Newtownards but most importantly deliver to vulnerable people at the point of their need.”

The charity’s chosen cause is for Sergeant Alistair McKinney, ex 1st Battalion The Royal Irish Regiment, who was shot in the head in Afghanistan and, as a result, has been left severely disabled. He and his family are part of the regimental family, his father having served with the Royal Irish Rangers for 22 years. Due to circumstances beyond their control there is a shortfall of £53,000 which is needed to get Sgt McKinney the equipment he needs for his home that will help his parents care for him. “Our staff are working tirelessly to achieve this goal however, this can not be done without the generosity of you the public,” Annemarie said.

As a result, Beyond the Battlefield has organised a fundraising Ball on Friday October 31 in the Stormont Hotel and everyone is welcome. The night will begin with a champagne reception, and along with local musicians, pipers and dancers, there will be an auction, all in aid of raising funds to help Sgt McKinney. Annemarie asked that if any local businesses or individuals would like to donate to the auction, they can contact her on 028 9122 5610.

“Newtownards is renowned for its generosity and support of our Forces and Services. We trust that with your help and generosity we will obtain our goal and give this young man the opportunity to move forward in his new life having served his country and paid the extreme sacrifice.”