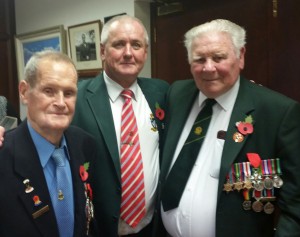 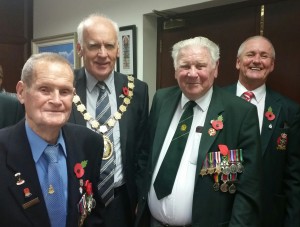 Beyond the Battlefield Veterans charity have once again proven that we have the interests of all veterans at heart.

Since Beyond the Battlefield were requested by these men and their families to become involved in ensuring that they receive the Legion D’Honneur medal that they were promised by the President of France in June 2014. Beyond the Battlefield, unlike many others were able through our contacts in the Ministry of Defence to cut through the red tape to ensure our hero’s received their awards at the same time.

We view our Borough as a unique place in terms of a small geographical area of the United Kingdom. We have three exceptional people who hold this award namely:

Lt. Colonel Blair Mayne, Marine Edward Spence, and Marine George Thompson. These men have their own stories to tell which in its self is amazing. They were on the Normandy Beach which is something we can only read about.

These two men are amongst the last of many to receive this award which has came Seventy years to late, because of protocol, even after the announcement it was very difficult to receive the medals. Beyond the Battlefield exist for every veteran no matter what age, campaign or what problem presents.

These men are our hero’s, there are many living with us and beside us who suffer in silence because the Government and politicians prefer to reward the law breakers and malingerers whilst ignoring the suffering of those who have served their Country with honour and distinction.

The people of our Borough have always been known for their dedication and unselfish support of our forces, our veterans and indeed all our services. Unknown to most, our veterans receive little or nothing from government or the main service charities. These two men carried out their duty and have lived their lives with honour, it has taken seventy years to give this recognition for the bravery they displayed during World War 2.

We have many veterans who live amongst us who are not entitled to unemployment benefit because they receive a military pension. Our veterans are being refused treatment by the Mental Health Services for their suffering which has been caused by the Wars and conflicts the Government deployed them to. Our Veterans are treated as second class citizens whilst murderers in government look after their own. We must support our veterans and work for change in the law which currently allows for terrorists to gain whilst veterans suffer.

Beyond the Battlefield Honour these two brave veterans and request your support in helping the many others who ask for nothing only to be treated with fairness for the job they did in the service of our country.

There are many Veterans who are entitled to Medals, Compensation, Pensions and medical treatment for wounds, illnesses, suitable housing and housing adaptions. Remember, if you’re a veteran of the Services and Emergency Services, Beyond the Battlefield are here to help and fight for your rights, do not hesitate to contact us.

November 3, 2015By Beyond The battlefieldUncategorized