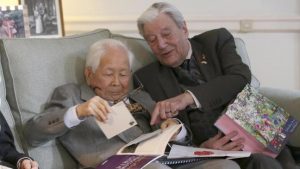 British ex-PoW meets Japanese veterans in Tokyo
Two veterans from opposing sides in one of harshest battles of the Second World War have shaken hands and sipped tea in Tokyo as part of a reconciliation programme between the UK and Japan.

Roy Welland, 94, a former British Army sergeant, and Taiji Urayama, 93, an ex-Imperial Army lieutenant, survived the Battle of Kohima in northern India, near the Burmese border, and met for the first time at a British Embassy reception in Tokyo.

December 5, 2015By Beyond The battlefieldUncategorized