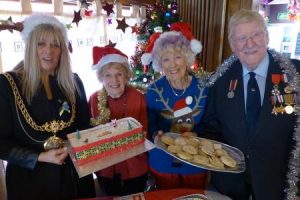 MORE than 50 veterans from Weymouth and Portland attended an annual Christmas celebration hosted by the borough’s mayor.

Cllr Christine James hosted the event at Weymouth Rafa club on December 9 where the veterans were treated to Christmas Cake, mince pies and a special festive message from the Mayor.

Local bakers the Dorset Cake Company donated the cakes and the mince pies for the borough’s annual December Veteran’s Rendezvous.

Cllr Christine James thanked the veterans for attending the event, and wished them a happy Christmas.

December 19, 2015By Beyond The battlefieldUncategorized