Members of the new group, The Light Infantry & Rifles Association, enjoyed a festive social at the Eagle in Ross last Saturday, December 12th. 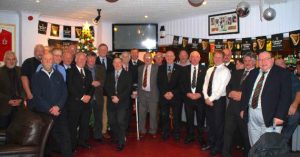 It was a great opportunity for former members of Ross ‘D’ company, the 5th Battalion of the Light Infantry, to catch up. Many of them had not met since the early 1990s.
Guest of honour was the President of the Association, Major General Greg Smith, who was pleased to see so many familiar faces on his return to Ross. The Major had first come to Ross to work with Colonel Bob Purvis and he encouraged him to join the Territorial Army. Although only planning to stay in the service for a few years, it was the start of a long and distinguished career with the reserves. He became the most senior reservist of the British Armed Forces and served as Assistant Chief of the Defence Staff (Reserves and Cadets) from 2010 to 2013. He will retire in May 2016. He told the group that he had very fond memories of ‘D’ Co and Ross itself.

December 16, 2015By Beyond The battlefieldUncategorized