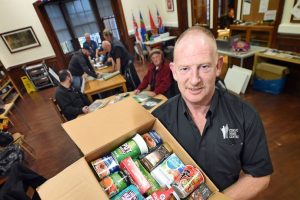 Veterans from a new drop-in centre for former members of the armed forces are collecting food and clothing to make life on the streets more bearable for hard up heroes.

Staff at the Coming Home Centre – which was officially opened in Govan earlier this year by veterans minister Keith Brown – have been swamped with donations of food and clothing.

December 15, 2015By Beyond The battlefieldUncategorized