A Big Dander Around Our Wee Country on the 100th Centenary Year for Northern Ireland. 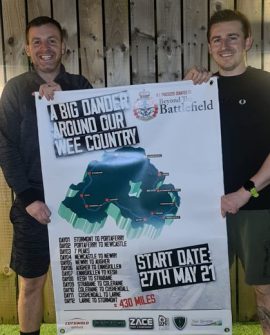 Over the past year due to the Pandemic no one has had a lot to look forward to and everyone is looking forward to the future with anticipation. Beyond the Battlefield were approached by two local men from East Belfast who, whilst in lockdown decided they wanted to do something extraordinary that they can remember the rest of their lives. Connor Ferguson and Ian Reid decided that due to the Celebrations for 100th Anniversary of Northern Ireland and the fact that Connor himself is a Veteran they would come on board with Beyond the Battlefield and carry out a forced walk around the whole of Northern Ireland in 12 days commencing 27th May 2021 to 7th June 2021. The proposed route as seen on the map begins at Parliament Buildings Stormont and finishes at the same place on day 12. Both men during the walk will be going through the six Counties of NI but what makes this walk extra special is on day three they will be carrying out the Mourne Seven Peaks challenge! On this part of the route, they will be joined by other groups who fully support the walk they are carrying out. During the walk Connor and Ian will be walking through:

Beyond the Battlefield are requesting as many people as possible within these locations support these men obviously within Covid Regulations at the time by simply giving them a wave, a beep of your horn and if permitted greeting them in statutory locations they are passing. As stated, 2020 has been an awful year for everyone. Beyond the Battlefield have stayed open throughout the pandemic and as a result have treated 854 Veterans and family members in that year. We would request as many people, Associations, Organisations, Businesses, Churches and Clubs if possible, to please come together and support Connor and Ian in what is by anyone’s standards a formidable task. We are also asking for everyone to get involved in some type of activity to fundraise during this event to support Northern Irelands many veterans as we move forward with their treatment in the future. For too long, the millions that the generous people of NI have raised for veterans has been sent to GB with little coming back to help our own. This year saw the closure and sale of Bennett House in Portrush which was a lifeline for many of our more mature and disabled veterans with no thought given to the impact this closure would have. We need to grasp and realise once and for all that Charity begins at home. Make your fundraising and donations count know the love the people of NI have for our veterans make sure that the money stays at home and that our Veterans come first. This will be an amazing feat which we do not believe has ever been attempted before it will also be an opportunity for everyone to get on board follow the guys on Facebook show them your support in the towns and villages and celebrate the 100th Anniversary for The Big Dander Around Our wee Country while supporting Northern Irelands Own Veterans Charity Beyond the Battlefield.

If you wish to donate: www.justgiving.com/fundraising/abigdanderaroundowc

Our Portfolio of Services are offered Free of Charge however, for the Charity to survive we depend upon donations and fundraising from our publics.

If you require support, information, Specialist Counselling, or assistance please contact Beyond the Battlefield on:

March 22, 2021By Beyond The battlefieldFundraising News

Thank you to BFBS Big Salute Campaign Awards Grant funding of £5,000 to Beyond the Battlefield.McKee Family’s “Thank you” on Completion of Marathon